Resources from our Residencies in Latin America

Capoeira is a dance, a game, and a martial art originating in Brazil by African slaves brought to the country in the 16th century. Today, it is practiced all over the world by players called capoeiristas. The two styles – Angola and Regional – combine dance, music, and acrobatics with fighting techniques.

Maculele is an Afro-Brazilian dance, as well. Dancers traditionally wear grass skirts and dance in a circle, or roda. They strike sticks to keep the rhythm of the dance and to spar with each other within the circle.

West 46th Street in Manhattan is home to the commercial area officially known as Little Brazil, though many of City’s Brazilians reside in the Queens neighborhood of Astoria.

City Lore recommends Capoeira by George Ancona, published by Lee & Low Books. This delightful and well-written books contains beautiful and instructive photographs of young people playing Capoeira in different parts of the world. A must for elementary and middle school students learning about this incredible art form.

Please visit the website, Brazil NYC for up to date information about Brazilian cultural events throughout New York City.

Mexico is a vast country, and like each of the places represented in this guide, it is home to varied communities with unique artistic traditions. In our artist residencies, we have largely focused on the rich folk dance traditions of Mexico. The many regional dances taught by teaching artist Cecilia Ortega, include:

Jarabe is Mexico’s official national dance, popularly known here in the United States as the Mexican Hat Dance. From Mexico City, it became internationally famous after Anna Pavlova, the Russian ballerina began performing it herself after a visit to the country during the Mexican Revolution.

In, Brooklyn, Sunset Park and Flatbush have the highest concentration of Mexicans, while in Queens Elmhurst, East Elmhurst and Jackson Heights have the largest Mexican populations. Spanish Harlem has the largest Mexican community in Manhattan, around 116th Street and 2nd Avenue. Staten Island has a large Mexican community in the Port Richmond, West Brighton, and Tompkinsville areas.

Mano a Mano is a New York-based non-profit organization dedicated to celebrating Mexican culture and promoting the understanding of Mexican traditions through Mexicanidad, an arts, culture and humanities program, and annual celebrations of holidays (Day of the Dead/Día de Muertos; Christmas/Posadas y Pastorelas), as well as festivals, concerts, performances, processions, installations and seminars. Visit the resource page of their site for additional external links.

Plena is a call and response singing tradition based on drum rhythms. In their day, pleneros offered commentary on social issues and political events affecting working class Puerto Ricans.

The vejigante is a folkloric demon that scares away evil during Carnival in Puerto Rico. Vejigantes sport fantastical masks made from paper mache or coconut husks, depending on the region, and feature bright colors and patterns, fangs, tusks, and horns.

For an introduction to popular foods of Puerto Rico, click here.

Puerto Rican enclaves in NYC are famously located in the South Bronx, Manhattan’s Lower East Side and Spanish Harlem, as well as in Bushwick, Brooklyn and Ridgewood, Queens.

Centro de Estudios Puertorriquenos is a research institute at Hunter College in NYC dedicated to the Puerto Rican experience in the United States.

City Lore also recommends, From Mambo to Hip Hop: A South Bronx Tale. This hour-long documentary tells a story about the creative life of the South Bronx, beginning with the Puerto Rican migration and the adoption of Cuban rhythms to create the New York Latin music sound. Produced by City Lore’s own Elena Martínez and Steve Zeitlin, directed by Henry Chalfant. Winner of NCLR’s 2007 Alma Award for the Best Documentary. 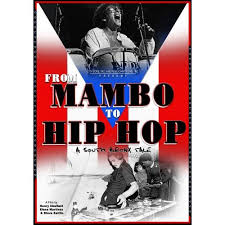